A Brief History of Stafford Players

Stafford Players began in 1943 in the middle of the 2nd World War, when enjoyment and entertainment were in short supply. The first production – Nothing but the Truth – attempted to bring a little light relief to the grim restrictions of wartime England. and was performed at King Edward VI Grammar School for Boys (now the Chetwynd Centre) on the Newport Rd. This is the first review of that first play, the only record we have.

These are the two earliest photographs in the Stafford Players Archive: both plays were staged at the Borough Hall (now the Gatehouse) in 1947. 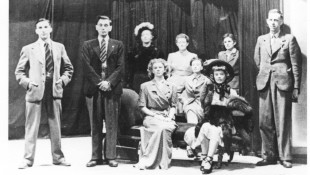 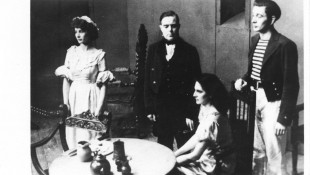 Plays were performed in the Borough Hall in Eastgate Street until 1958 when Stafford Arts Centre opened in the Oddfellows Hall in Greengate Street. Volunteers working with Stafford District Arts Council then helped to make the Borough Hall into an arts theatre and in 1969 Stafford Players moved back there. 10 years later, the Borough Hall was completely refurbished and modernized, to create the Gatehouse and Cabin theatres, and today the Society uses these fully equipped professional venues, the ultimate contrast to the surroundings of earlier years. In 1996, the Cabin Theatre was renamed the Malcolm Edwards Theatre – now known as the MET – in honour of a man who not only contributed much to the cultural and artistic life of the town, but was also for many years an active member and former Chairman of Stafford Players.
The group’s reputation for presenting demanding and important plays was established in the 1950s, and it always aims high in its standards of directing, acting and stage presentation.Stafford Players are members of the North Staffordshire Drama Association, which is affiliated to the British Drama Festival Association, and most of their productions are adjudicated as part of the regional and national full length play competition. 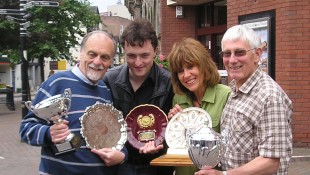 They won their first festival awards in 1965 and have been presented with many more since that date. As winner of the NSDA (regional) Festival, the group has several times qualified for a place in the British All Winners Drama Festival, and managed to take up their place and compete twice, winning the Amateur Stage award for second place in this national finals with The Dresser in 1988, and again in 2010 with Humble Boy.

Check  out our most recent awards by clicking on this link .

We won! A good year at the NSDA awards  for Stafford Players

The society maintains a full historical record through its archives collection. The hard copies are deposited at the Local Records Office, as part of Stafford town’s history. A full electronic archive is also maintained.